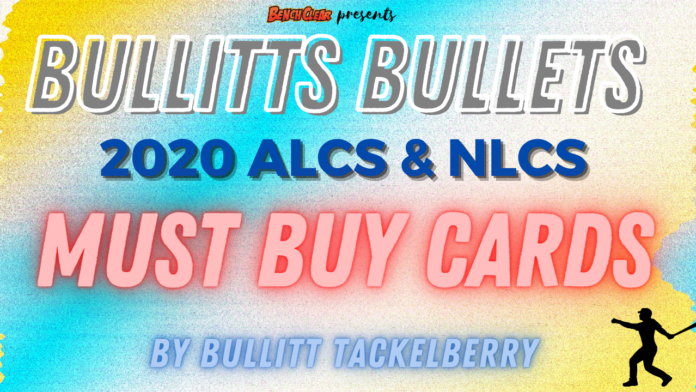 This may not have started out like our grandfather’s playoffs, but the cream always rises to the top.  Sure, the Yanks are out and as quick as Gleyber Torres came, he went.  We’re also bummed to see Trent Grisham come off our list.  These two are just getting started. They should hold their current value and look to start anew in 2021.

This time around we’re taking a look at each team and where we might find some value.  We’re not always looking for players to buy, sometimes we just need to find the hot sell and take advantage of it.

If you’re anything like me, selling makes the hobby go round.

Let’s get digging through those piles of 1st Bowman and flagship rookies and have them ready to go.  Don’t miss this playoff opportunity to generate some hobby revenue to fuel your PCs.

Hello Rays…. I guess you were serious.

This team has a few hot sells that you’re bound to have sitting around.  Elephant in the room….Randy Arozarena is hot. Real hot.  The only way he could be hotter is if his walk song was simply the sound of his name rolling off the tongue of Michael Buffer.  No card is hotter right now going from zero to sixty while he crushes a .444BA, .926SLG, and a 1.426OPS.  If you bought any 2020 Topps Series 1 or Chrome, now is the time to dig his rookie out and move them.

Mike Brosseau doesn’t get mad, he gets even.  Hitting the game winning home run off legend Aroldis Chapman, who threw at Brosseau earlier in the year.  While this makes for great headlines, I’m looking for more.

Austin Meadows is probably one of the most recognized players in the hobby on this team, but his 2020 stats wouldn’t reflect that.  He has all the talent in the world, but only two hits this post season to show for it.  Meadows made them both count in the form of Home Runs.  We’re all hoping he can get hot.  If this team keeps this run going, it won’t be because Brandon Lowe stays ice cold.  Lowe smacked 14HRs and drove in 37 RBI during the regular season.  With the Rays’ ceiling usually being capped, I’m generally looking for big moments to drive a spike for an opportunity to sell.

Dusty Baker is letting the “Us Against the World” cliché run wild.

We love to hate this team and they love to remind us they don’t care.  George Springer, Jose Altuve, Alex Bregman, and Carlos Correa have all turned it up a notch this playoff season.  Kyle Tucker continues to get a BUY from me, as he’s the only one without the stink of a trash can on him.  It also helps that he stayed red hot in the Divisional Round.

The Four Garbage Men could scrub some of the stink off and help all of our inventories out with a World Series appearance.  As we all know winning big games via the long ball cures all ill things Hobby related.  If I see their values rise, I might have to look at selling and regain some of the pre-scandal investment.

Knocking on the door or running into a buzzsaw?

With young talent all over this lineup, they’re going to need to hit on all cylinders if they want to fulfill their World Series dreams.  Dansby Swanson proved vital to the Braves Divisional Round win, accounting for 6 runs and 5 RBI on 4 hits with 2 home runs.  He has the best combination of age, potential, and value on this teams and continues to be a buy.  After that this team is split into two categories for me.

The first being occupied by Ronald Acuna and Freddie Freeman.  There is a high admission price to jump on this ride but VERY little down side.  Both will need to lead this team to a ring, with Freeman needing to return to his regular season performance that has him in the MVP hunt.

The second being an ultimate game of boom or bust young talent such as Ozzie Albies, Austin Riley, and Marcell Ozuna.  All three need to produce more at the plate.  With their entry level pricing it could be hard to get caught holding the bag.  I don’t want to give up on Albies even after his struggles in this shortened season, but I’m not sold on Riley.  Ozuna could ultimately be hurt by his journeyman tag that doesn’t leave him with a strong fanbase.

One other guy who keeps flying under the radar is Catcher Travis d’Arnaud, as he put up the best season of his career hitting for a .321AVG, .919OPS, 8 doubles, 9HRs, and 34RBI.  Travis has been the engine of this lineup for the post season, playing even better with a .421AVG, 1.423OPS, 2 doubles, 2HRs, and 7RBI.  In the end you’d really have to dig through those rookie stacks to find this aging catcher in his 10th year.

On a mission and tired of being the bridesmaid.

I don’t think they even blinked while running through the upstart Padres in the Divisional Round.  This lineup is loaded with stars like Mookie Betts, Cody Bellinger, and Justin Turner.  We all know their value…so we’re going to focus on two young guys who have great hobby value with room to rise.

Corey Seager has been undervalued since coming back from injury (last season) and remains an attractive buy.  I can’t see him staying undervalued while he continues to perform under the national lights of the NLCS and likely the World Series.  Towards the top of this lineup we should continue to hear his name whether it’s crossing the plate or driving in runs.

Then there’s catcher Will Smith.  He was all over the postgame show after becoming the first Dodger and youngest player in MLB history to collect 5 hits in a playoff game.  Smith has been in a time share behind the plate as the Dodgers break him into the bigs.  That has started to fade away.  For the purpose of this article he should be an easy find in your rookie stack of 2019 Topps Update Series.  At his current price Smith is a buy and hold for me.  As Smith should be a main stay in this dodger’s lineup and one of the better offensive catchers in the league over the next few years.

Thanks for reading! Be sure to come back next week for an update in the World Series

2020 MLB Disappointments and HOW Baseball Card investors MIGHT respond?

What Happened???? As we are in the middle of the baseball playoffs, it seemed like a good time to take a step back and look...
Read more
ARTICLES

It’s TUA TIME! The Dolphins have announced Tagovailoa as their STARTING QB! What cards to get now?

It's happening. The Miami Dolphins are ushering a new era for their football team. Next week, when the Dolphins return from bye...TUA TAGOVAILOA will...
Read more
ARTICLES

Let’s continue the MLB Playoff budget-based fun.  But first we’ll review some of the good and the bad from my Wildcard round calls. The Good:...
Read more
0 0 vote
Article Rating
Subscribe
Login
0 Comments
Inline Feedbacks
View all comments
- Advertisment - 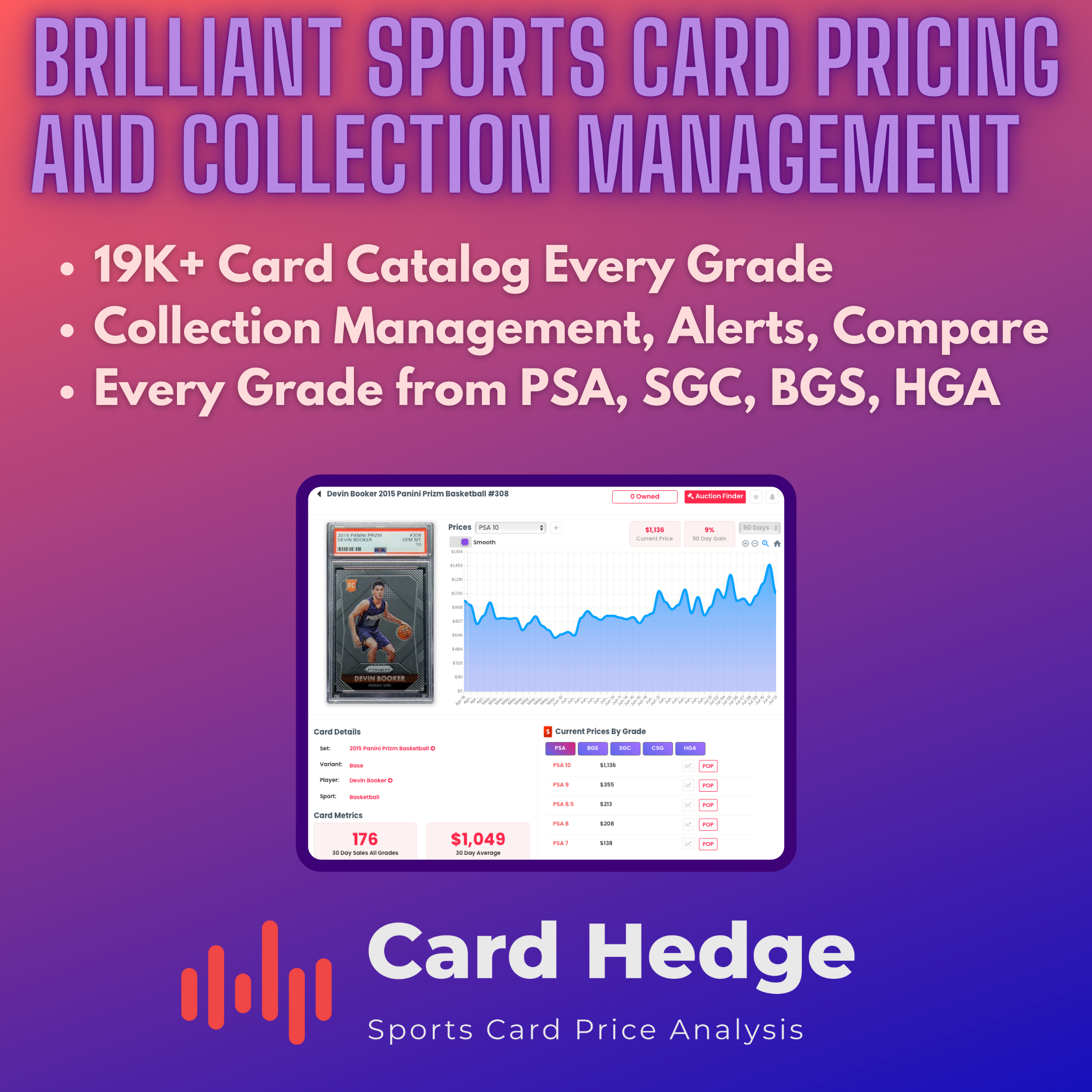 Montana Card Show BLOWS us away!

The goal of Bench Clear Media is to provide the most comprehensive network of thought provoking, unbiased, and insightful hobby content in the sports card industry.